They just wanted to be made. – Elle

I had posted these on instagram the other day, just a small macro shot, and immediately got requests to see more. Well, the thing about that is that these are ridiculously difficult to photograph for one simple fact – they are huge. 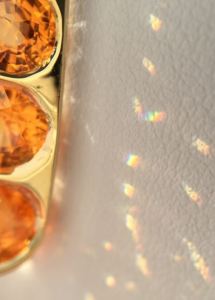 A couple years ago, when we were still in California, I had an overseas collector send me a great number of stones to sell on consignment. That’s the reason my etsy shop was initially opened. There were a handful of stones that I knew immediately that I didn’t want to sell – I wanted to create something with them.

My starting point in this particular project was the largest pair of spessartites. They just glowed, in an almost unearthly way, with this ridiculous neon orange that photos don’t really do justice, as orange is one of the hardest colors to photograph accurately. 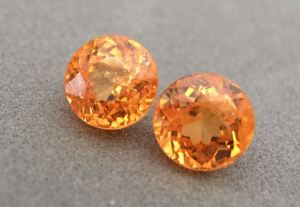 Now, this collector had sent along literally about 40 carats of spessartites, including a handful of smaller round oranges with fantastic color, and a pair of bezeled round spessartite earrings. 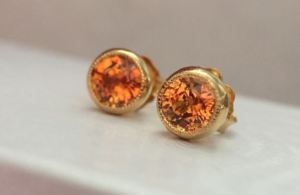 Spessartite, as with most gemstones and colors, goes through bursts here and there of popularity and trendiness. Unfortunately, just as I got this package, spessartite was hitting a slow spot, so most of the loose gems that I had never even hit the market. Instead I started to have big dreams for them, all brought upon by the incredible color of that large pair. I created a sketch of the initial idea, which included using the bezeled studs as is and then later amended it to add a few details, involving a change to the stud. 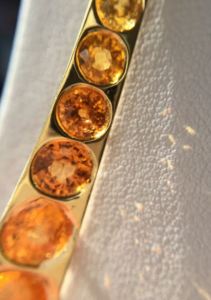 About six months ago I went to visit my favorite gem shop and one of the first things on my mind to pick up were gems that would fit the ombré  color scheme I had dreamed up.  I needed to find exactly the right graduation of color and size to match cohesively with the overall concept. Luckily I was able to find that in some sapphires from Madagascar. 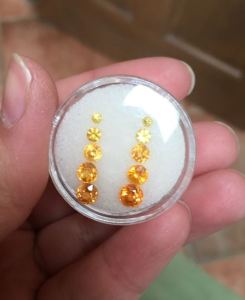 As soon as I had all of the stones collected, I sent the picture to a friend. 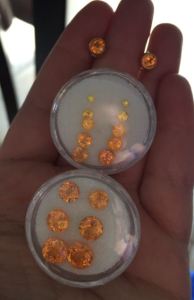 And a couple months later, she asked me when I was going to make the earrings? Why hadn’t I made them already? I had all of these beautiful stones, why not make use of them already? So I turned around that week, and sent them off to the jeweler, along with a picture of the sketch. 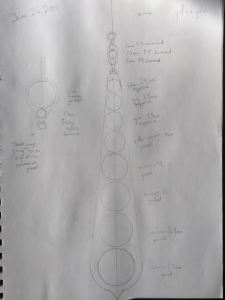 As I mentioned before, the sketch went through a couple of revisions. The final version ended up being so large that the entire thing wouldn’t fit on one page of my sketch book, so I had to improvise a little bit, and drew the stud separately from the rest of the earring. A quick note: I draw everything at 5x scale. 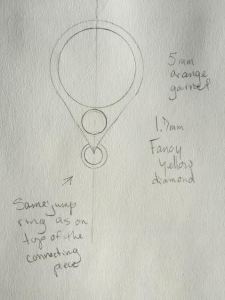 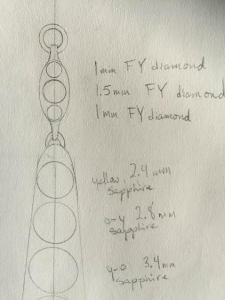 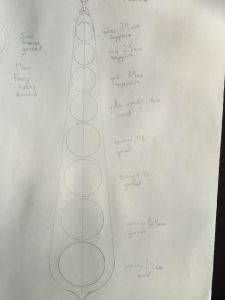 So, lets talk specifics of the finished product. 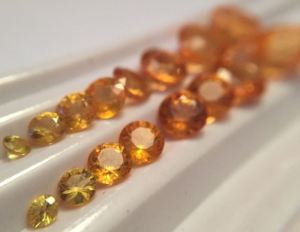 The bottom 5 stones are spessartites, the top three in the bottom section are sapphires. The top stone (the stud) is a spessartite and then the rest (second stone in the stud and then the little connecting section) are all fancy yellow diamonds. 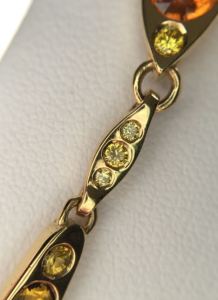 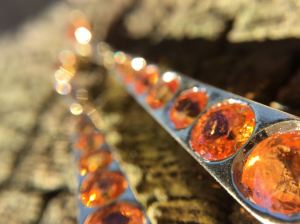 These are definitely more hefty than I usually make, but the one thing I wanted out of these is that I wanted to have that heft, and I didn’t want them to feel cheap. I feel like they easily could have gone the costume jewelry route, but the setter managed to avoid it, keeping the walls between the stones quite thin, and the edges from stone to outside rim thin in most areas . The largest stones are 7mm and very deep so we really had to have a lot of metal to hold them all in place.

The settings are open in the back to let in a ton of light, even though they are bezeled. The emphasis for this project was really on the stones, the ombré effect and the concept of light. Seeing as how it took about two years to find the right stones in the right sizes, tones and saturation to I really wanted to not detract from the concept as a whole and keep the ombré effect in the metal that’s holding the stones together. As you will see in the images below, the color of the stones change from one image to another – the most accurate devices for color viewing are Apple products, iphone, ipad, Mac computers, and images with the brightest colors and least amount of brown are the closest to real life. 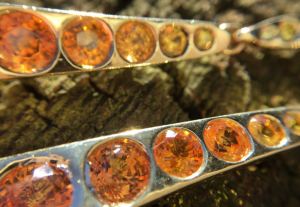 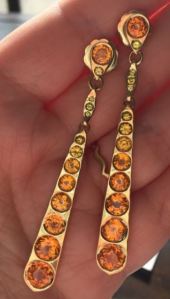 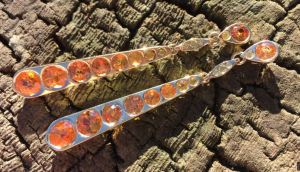 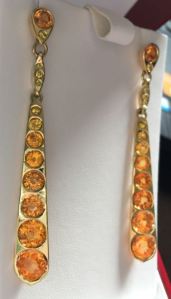 They measure just over 2.5 inches long. 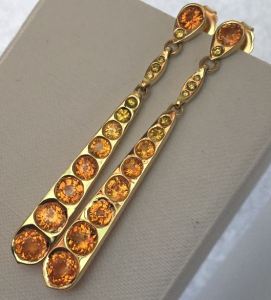 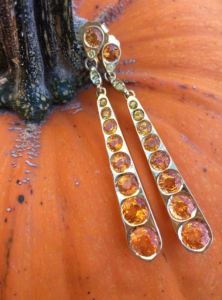 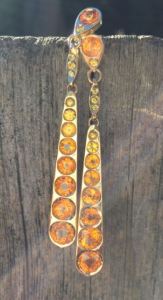 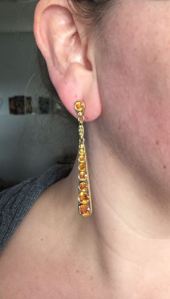 Everyone keeps asking me, “why did you make these? Are they for yourself, or to sell?” and my answer has been, “They just wanted to be made.”

At the moment, I don’t know what the future holds for them. But absolutely something bright.