Sometimes life throws you lemons, and you have to make lemonade.

Consider me a lemonade factory at the moment.

Feel free to reach out via the contact page with inquiries, and I will do my best to respond in a timely manner. Please keep in mind that I’m a full time employee with an super impressive sounding job title, a full time mom to a wonderful, vivacious child and that I do jewelry for fun and because it’s my passion. So patience would be greatly appreciated at this time!

Hopefully soon everyone’s patience will be rewarded with some evolution in my jewelry designs and photography.

I’m still not really sure how Alli and Doug found me, but they did and I’m absolutely delighted that they did. Otherwise I wouldn’t have had a part in this gorgeous ring, which would have been terrible.

Back in the Fall of 2016, Alli and Doug reached out and asked if I would be interested in making their engagement ring. They had bought a gray spinel, and had several items of family jewelry that they wanted to use the stones from. If you’ve followed me at all, you already know how into an idea I am if it has a gray spinel attached to it. But I was intrigued both by the couple and their design ideas, as well as the center stone!

They expressed later to me how difficult it had been to find a jeweler to execute their vision for their ring, and I can sort of understand why because it’s not conventional, and there really aren’t that many jewelers who are willing or want to take on an unusual request. Especially for a gemstone. I am honored to be asked to create this beauty for such a special sentimental ring!

So they sent along some guides as to what they wanted their ring to look like, with some examples of each one, and we went back and forth on lots of the details for a long time, trying to iron out each element.

They wanted the gray spinel to take main stage from top down, and not have any of the accent stones visible from the top down. They wanted double prongs (which is always a stability concern for me with cushion cut gems! Double prongs are always best for cushions!) and an antique feel.

Luckily their requests came with a stone that was large enough that we could add a lot of detail and still manage to hide everything under the stone. 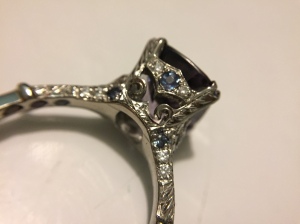 I had to play with proportions of everything, but at one point, everything just flowed together with all of the inspiration photos they had given me, every element that they had asked for, and my own little flourishes.

They had me add their birthstones, an amethyst and a garnet plus an alexandrite into the shank, against her skin. 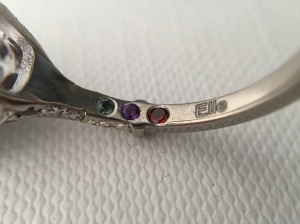 A view of the tucked under family diamond, detailed with accents inspired by a 1950s birthstone ring that belonged to my mother. This shows it alongside a gray gold Accolade band. 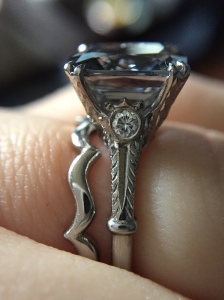 A bit of an idea of what it looks like on the hand with a quick handshot from yours truly!

One of my flourishes, and Alli and Doug still don’t know this, is that when I was thinking about the project, I was strongly inspired by Alli and felt that she had a certain kinship with Wonder Woman. As a result, I mimicked Wonder Woman’s tiara shape in the profile of Alli’s ring, which you can see best when it’s upside down.  Alli is an athlete and a dentist (technically a prosthedontist) and those are just the tips of the iceberg when it comes to describing how gifted this woman is!

I love how this ring looks slightly different from every angle.

A closer look at the family diamond we bezel set on the shoulders of the ring.

You know I cannot resist a gray spinel, especially a giant one like this! Once Alli saw that I had started to offer gray gold as an alternative to the traditional white, she jumped on the bandwagon immediately, and I think it came out incredibly well, and suits the stone perfectly.

And to finish off, a couple macro photos on an antique beaded purse. When Doug surprised Alli with the ring, he turned off all of the lights because I had sent it in a ring box with a light in it, and she was really confused why he was turning the lights off, until he opened the box! 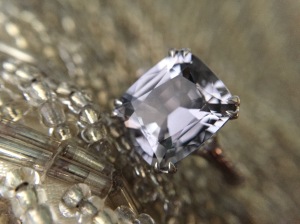 When the ring was completed, I emailed Doug, and I told him that if he trusted me, he should just let me send the ring, and forgo seeing pictures of it beforehand. He did, and this blog entry would be the first time he would see the photos I had taken!

Doug & Alli, it was my utmost pleasure to work with you and I hope that we can work together again in the future! Enjoy that stunner of a ring and congratulations again on sharing your life with each other!

Here is a collection of 10 fast facts you probably don’t know, and couldn’t guess about me: 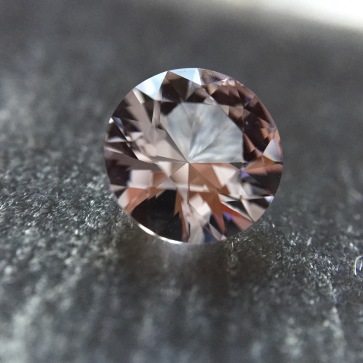 Bonus: I am a total city girl, but since moving to Eastern Washington, I have adapted incredibly easily to small town life. Thank goodness for the internet! While I love the convenience of city life, nothing is more beautiful than an incredible sunset, followed closely behind by a clear night sky. Color and sparkle. That’s where it’s at.