My mother was an October baby. So as a result, I grew up enjoying a couple rings in particular, and I had to share them, even though I don’t really know much of the history behind them or any of the details about the stones or the pieces themselves.

First up is a beautiful opal and onyx ring that was gifted to my mother from my grandmother – my father’s mother. The timeline of their relationship makes me think that it was given to her in the 1970s, but I feel like the ring looks like it was made in the 1950s or 1960s.

It’s a very small ring size, and only fits our pinkies, so I would guess that it’s around a size 3. 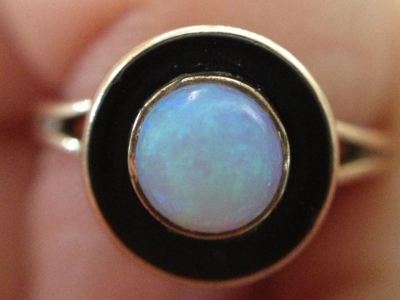 I’ve never been a huge opal fan, despite growing up with this ring, because I tend to like gems that sparkle more, but there is something to be said for the colorplay in opals. 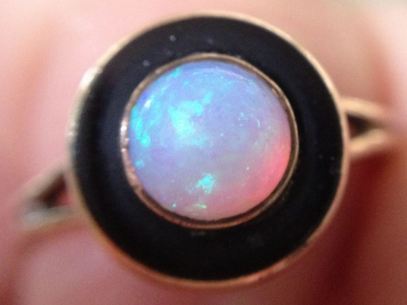 I love how the circles are repeated everywhere in the ring, with the round doughnut at the base of the head, and the semicircles under the onyx. 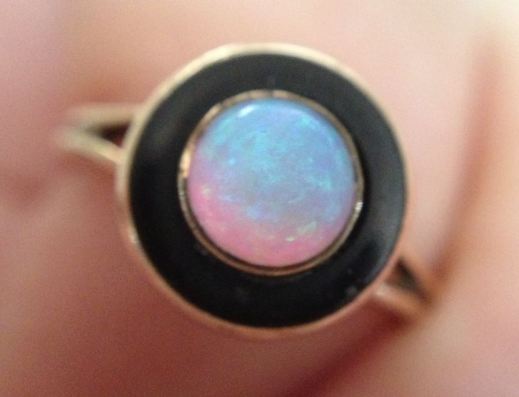 Unfortunately, there is a chip in the onyx:

This ring is a pink tourmaline, and it was given to my mother by her mother, as a birthstone ring, when my mother was about 13 years old. I’m sure that she wore it a lot, as the prongs are paper thin, the milgrain on the side engraving detail is almost worn away, and the shoulder detail is not as fine as it probably once was. This ring is especially important to me because my mother’s family was very poor, and this ring would have been a major stretch for them financially. 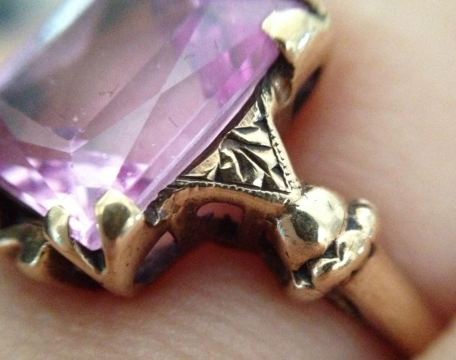 The stone seems to be scissor cut, and has a nice big window in the middle, but I don’t particularly care about the cut quality of the stone for this one.  The color is beautiful and the complete piece is enchanting, so I can overlook the flaws, especially considering it’s sentimentality. 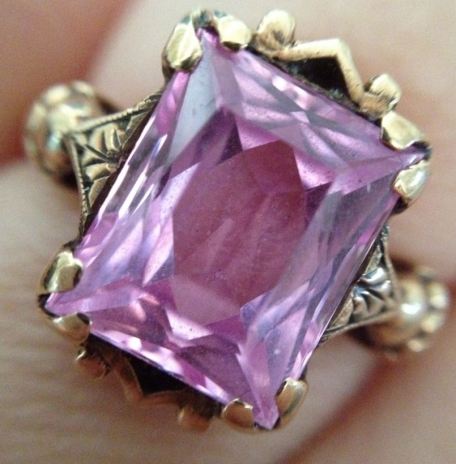 I really wish I could have seen it when it was new before the details were blurred. 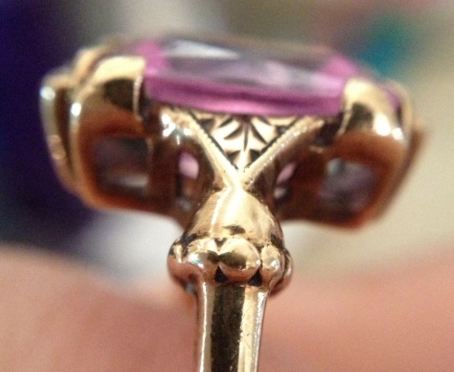 I think that part of the draw for sentimental jewelry items is knowing that your loved one wore it and loved it too. But also, for most people, heirlooms might be the only taste they ever get of antique jewelry. That is terrible in my opinion, because I think there is a lot of great beauty to be found in antique jewelry and it’s horrible to think about how much of it has been melted down and destroyed.

So, I suggest keeping an eye out for beautiful antique pieces! Jewelry stores often have “estate” sections with used items, or if you ask, sometimes they might have things that other people have sold for scrap. It’s always worth asking about!