I want to take a post to talk a little bit about this garnet. I had been eyeing it for years from my favorite gemstone supplier, and at a certain point, could no longer resist the temptation and brought it home with me.

There was a point where I thought about setting it and selling it as a piece, but I’ve been working so hard at trying to build up my list of prototypes for my jewelry line, that I can no longer justify holding onto it. So, it went up into my etsy store last week, and hopefully it will go to a good home. 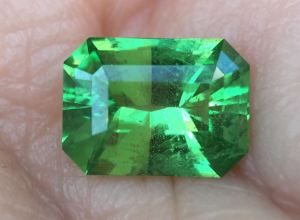 However, in the time between going from considering selling it, to listing it to etsy, I sent it to an expert on all things green garnet to get his opinion on it and give me a quote on how much he thought I should list it for. I’ll be mysterious as to that person’s identity for now, but I plan on writing a blog with information from him at a later point in time.

This image and the following 2 images show it with natural light hitting the left side and artificial lighting hitting the right side.

The crystal is actually quite clean, but has some veil inclusions that are pretty evenly distributed throughout the stone. 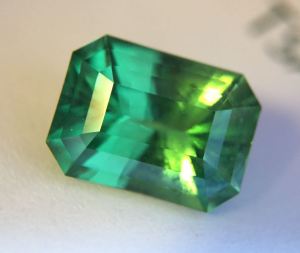 As you can see, it’s a pretty remarkable gem, a gorgeous bright open medium green that really catches the eye, especially with it’s size.

And a terrible picture of some really gorgeous little tsavorites that I adore and picked up at the same time. I have no idea what I’m going to do with them but I will figure it out sooner or later! They were far too beautiful to leave there. 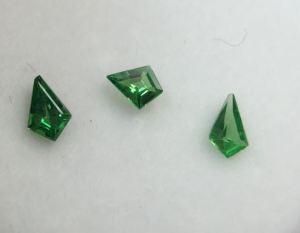 I just realized that it’s possible to take advantage of my fall sale coupon code with this garnet, making it a really great deal! Of course, I’m always open to offers as well.