A touch over two years ago I posted a blog entry about a planning a specific project:

Well, it evolved. I will get to that in a second.

The first time I ever went to New York City was when I was 18 years old with my parents for a business trip for my dad. I remember walking the streets wearing furry Steve Madden shoes and having a doorman compliment them. I fell in love with the city in that trip, between the Empire State Building, the flagship stores, the food, the energy and life of the city. I didn’t know it at the time, but only a few short years later, I would be going to school slightly upstate from the city.

It wouldn’t be until I went to NYC via train from upstate that I would first experience Grand Central Terminal in all of it’s glory, between the Oyster Bar, the marble floors, the tile ceilings, and the glorious teal ceiling bedecked with celestial gold in the main hall. For me, with the Grand Central ceiling, it was love at first sight. Every time I would take a trip to the city via MTA, I would be delighted to experience it’s beauty once again, and I would look forward to seeing that ceiling every time. 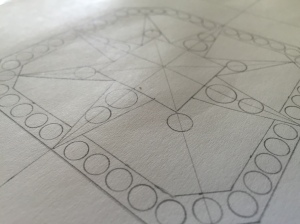 So, since I don’t get to do that regularly anymore, I had to base a piece of jewelry around it.

My starting point, as is often the case, was color. I had a copper bearing precision cut teal tourmaline from Barry Bridgestock that was absolutely the color of the ceiling.  I knew from very early on that I had to have yellow gold, as the zodiac symbols all over are painted in a golden color. It was only later that I would decide that the piece would need to have white gold as well, which was a difficult conclusion for me as I’m typically not a fan of mixed metals.

In planning the rest of the elements of the design, I took into account an incredible number of details from around GCT, from the arches of the hallways, to the color of the walls and the floors, to the incredible iconic pendant chandeliers. I evaluated every single one of the zodiac symbols, the detail of the arches, the Tiffany glass of the clock, the golden clock in the middle of the terminal, the detail of the windows. Essentially, the entire building is one very large piece of functional art, each detail has had painstaking work put into it by artisans of years past. There is some sad irony in the fact that most people who witness it never take the opportunity to enjoy those details.

I started out thinking that it would be a ring. I soon found out that between the stone size, the ring size and the sheer scope of my vision for it, a ring that size would be essentially unwearable on a regular basis.  So I ended up changing it to a necklace. And of course I took the opportunity to use a stone that I have an infatuation with – a rose cut diamond. This time around, I decided that it should be prong set with a hexagonal surround, to echo the geometry of the iconic graphic feel of the Art Deco era.

For a while I considered something that had to do with my zodiac sign, my husband’s zodiac sign and my daughter’s zodiac sign, but that became too complicated and didn’t end up making any sense design wise. So I simplified, 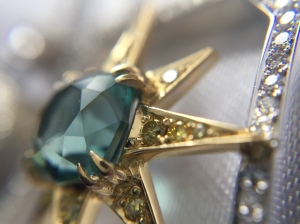 I considered adding a detail from the arches (also seen on SNL’s GCT set) to the eventual outer halo, but nixed that idea as it became too busy. I also considered having no negative space, with just the contrast of diamonds and metal color to guide the design, but again, cited the busy-ness of the design for utilizing negative space rather than adding more to an already complex concept. 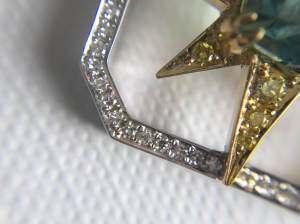 I ended up with just a thin outer diamond halo to provide some structure for the centerpiece of the piece, and I chose a octagonal shape for it inspired by the octagonal frames around the medallion detail on the large arches on either end of the building. (Bottom left corner in the below image.)

I originally designed the star’s diagonal points to stretch all of the way to the halo, but after thinking, and evaluating the actual stars of the GCT ceiling, as well as looking at the Art Deco stars, I realized that while it may be less stable, shortening the diagonal points would be better for the over all aesthetic, and echoed the compass like shape of the actual GCT stars.

Elevating the star and the stone just a touch was the finishing detail. I used fancy yellow diamonds on the yellow gold and single cut white diamonds on the outside halo, in keeping with the Art Deco era.

It is not very often that I create jewelry for myself anymore. This isn’t a piece that I will probably wear often, but it is a small, sparkly tribute to a city that I love, and the Art Deco masterpiece that lies within it. 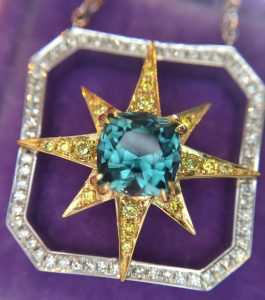