I figured that it’s the day after Thanksgiving, I might as well post a project that has been in the works for years, because after all of this time, it’s gotten to be pretty special and has some sentimental meaning for me. And my favorite holiday is Thanksgiving, so why not?

I went to school up in New York State for almost a year, and spent all of my spending money on traveling to New York City. My favorite place in the entire city is Grand Central Terminal, but I find myself inspired by the city as a whole, especially by the Art Deco designs that are so prevalent throughout. The Empire State building’s interiors, the Chrysler Building’s tower and spire, and of course Grand Central Terminal make me fall in love with the city all over again, every time I am there.

So I’ve been wanting to do a NYC inspired design for some time, and I’ve been tossing around a few ideas using the architecture and interior designs from NYC landmarks as the inspiration for this one, very special piece. Here are some of the sketches of the ideas I’ve played with.

Playing with the star layout of some constellations and looking at the arches from the windows in GCT: 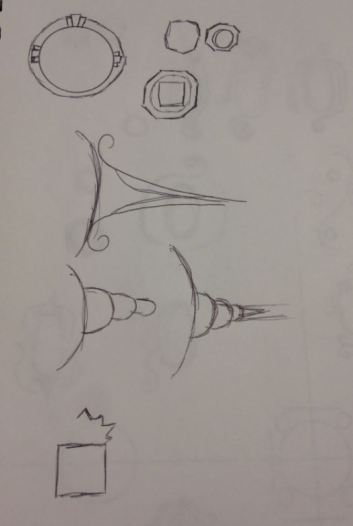 Starting to grasp an idea of what I think I like the most, elements from GCT:

Developing the idea in a more comprehensive way, using actual proportions for real stones. You can see the changes to this initial idea I want to make over to the side.

Getting there. Still seeing if this idea is where I really want to go, and seeing if it’s something I can actually make work. I see it in my head, but so far I can’t make it work on paper. 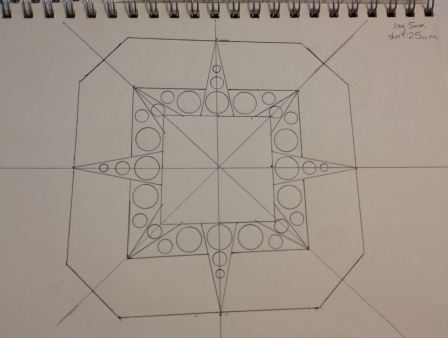 As you can see, I have come up with a pretty complex idea, and it’ll take a long time to put together something that works the right way. There are a lot of elements to fit together and it’s a bit like a puzzle. I think I know where I want to go with the next sketch, but when the sketches are this large (this is 10x the real size of the gems) it tends to take longer to do even a minor revision.

Color is going to come into play in a big way on this piece, but that probably won’t be seen on paper, because I do not feel comfortable at all adding color to my sketches at the moment! Colored gems seem to have a unique and irritating way of making their “look” impossible (or at least pretty difficult) to capture on paper. Must go practice!