Once upon a time, I found a list of jewelry/gemstone gifts that were to be given at anniversaries. Well, my husband being as awesome as he is, decided to follow that list, and as a result, I found myself looking at a gold present for my first anniversary.  So I found some antique cushion cut diamonds that were not particularly well matched at all, but roughly 4x5mm, and had some custom stud earring settings built around them.

Years later I decided to reuse the diamonds and add them to a ring, leaving the settings open for new stones. So I went to my favorite gemstone store with my favorite jewelry maker, Erin at http://www.willajunejewelry.com/ and picked out a pair of 4x5mm oval spinels to go in the settings.  But they don’t match.

When I was about 13, my best friend and I went and picked out earrings, and the ones that we liked the most ended up being mismatched singles, but we were cool and according to fashion at the time, mismatched was cool. So we bought some mismatched earrings. Mine were studs, a small blue-gray glass ball and a round ceramic stud with a tiny ocean wave painted on it.

So my mismatched spinels are reminiscent of that childhood experience, since the original mismatched earrings are long gone. One stone is a more silvery blue, while the other is a grapey-purple. These pictures were taken at night using a macro lens, so the lighting leaves something to be desired, but you get a pretty good idea of what they look like. 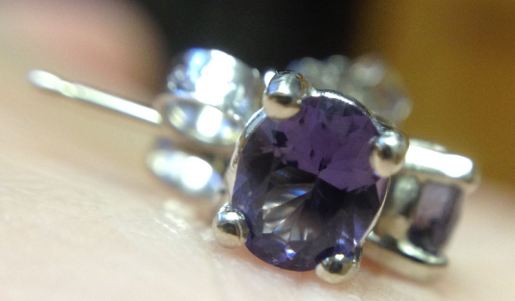 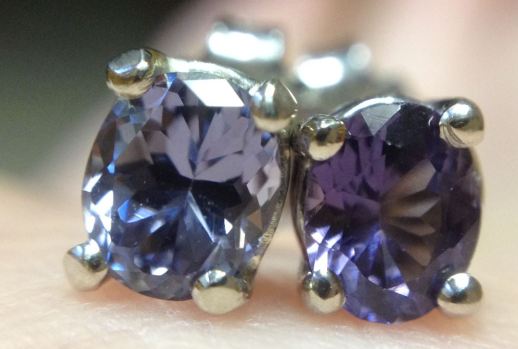 Anyway, I hope that my daughter enjoys them, as I wanted to make sure that the gold settings were kept in their original form, since they were such a sentimental gift at the beginning of our marriage.

In other news, I just returned from a trip to San Francisco, and managed to fit a trip to http://www.langantiques.com/ and I took lots and lots of pictures. I haven’t even managed to go through them yet, so you can look for an upcoming feature on my experiences there and some of the pieces I got to look at.