Using the term “small” here is kind of facetious, being that the rounds aren’t exactly tiny, hovering just under the .30ct mark each, and are larger than some people’s engagement rings. The round stones are about 4mm each, antique cut, mostly Old European Cut diamonds, but with some early modern round brilliants as well. All seven of them end up totaling about 1.9ctw.

Some people refer to these small square diamonds as being “square step cut” or “square baguettes” but I call them carre cut. They distinctly do not have cut corners or windmill type facets cut into the pavilion, and are actually quite simple in their cutting style. They are thought to be predecessor to the princess cut.

I love sprinkling diamonds onto a surface and photographing them as they lay. I am not a diamond girl, even though I was born in April, and until recently stuck almost exclusively to colored gems. Recently I’ve come to realize that diamonds are nice too, just not nearly as brightly colored. 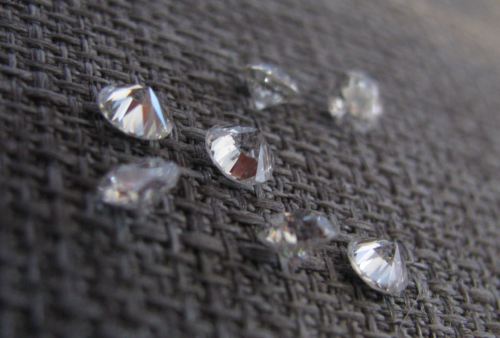 I don’t actually have any kind of grading on these round cuts, and they are not perfectly matched, because if I wanted perfectly matched antique stones, I might die before finding them. But I think as far as color, clarity and size, they are well matched.

The carre diamonds are around 2mm, and some are chipped, as you can kind of make out in the picture. They originally came from a yellow gold 1980s band, and were channel set, along with a lone princess. I imagine that a jeweler decided to replace a carre with a princess since carres are not exactly plentiful unless you know where to look. They total about .30ctw since they are so small. They have very flat crowns with large tables, and therefore face up large for their size.

I have a love affair with step cuts, and I love the big flashy facets from OECs, so these two little parcels are some of my current favorite stones. 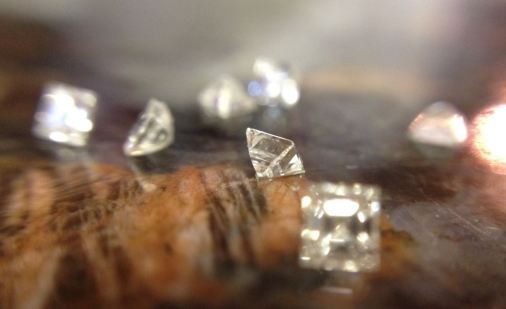 Both sets of these stones will probably be going into bands at some point, but specific plans have not been made yet, just ideas floating around in my head for now!