Since diamond is the birthstone for April, I’ll stick with writing about them for the most part this month. It really helps that I’ve been playing with them a lot lately in a variety of forms. So today I want to talk about a rarer form that diamonds take on: Rose Cut.

I have to laugh because I asked a local jeweler once, maybe a year ago, if he could make me a rose cut band. He replied, wait for it, that he didn’t know what a rose cut was. I hope that now that they seem to be gaining more mainstream appeal that he figures out what they are. Tiffany is completely littered with rose cuts right now, in fact, they designed a whole collection around them. I haven’t been back to that jeweler since then, but that’s due to a combination of factors, not just rose cut ignorance.

One thing to note about rose cuts in that the higher a crown is,  the better looking it’ll be. Rose cuts are basically shaped like a bubble, with a flat facet on the bottom, and facets going up to create a bit of a dome, typically a pretty flat dome.

A key to rose cuts it to be realistic in what to expect from it’s performance. Rose cuts tend to flash light off of it’s surface facets, instead of refracting through the table and from the pavilion, because they don’t have a pavilion. So rose cuts tend to have little sparkle, and more of a mirror like appearance. You’ll often see rose cuts interspersed with brilliant cuts so you have a combination of the sparkle from the brilliant cuts and the light (and color!) moving across the surface of the rose cuts. 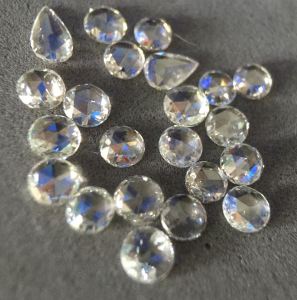 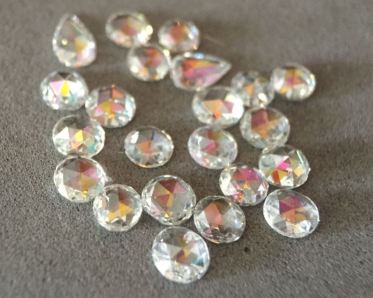 Rose cuts are one of those things that you either love or hate. They are typically used as accents, rather than a center piece of a project, so finding large rose cut diamonds that are the main stone in a piece is pretty rare, although it’s becoming more and more common!

Here are a couple of rose cut pears, illustrating that they don’t just come in rounds, but also other fancy shapes such as pears, ovals, cushions, marquises, etc:

One thing I’ve noticed about rose cuts lately is that people are just flipping over badly cut stones (typically very shallow stones) and calling it a rose cut when it’s really not, it’s just a badly cut stone. Classic rose cuts have a particular facet pattern, with a hexagon pattern on the top. There are currently several rose cut style patterns for gemstones being developed, most notably by Jeffrey Hunt and Doug Menadue of Bespoke Gems.

Thanks to Jewels by Grace for letting me play with these beautiful little rose cut diamonds! They are spectacular and I want to keep them all! 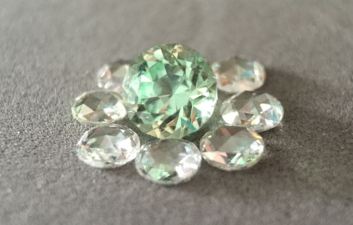 One thought on “Diamond Rose Cuts”